According to the tectonic and sedimentology evidences, we can include Qeshm as part of the south of Zagros. The external similarities as well as the existing harmony between Qeshm Island’s big anticlines and Zagros' anticlines are some proofs confirming this idea. 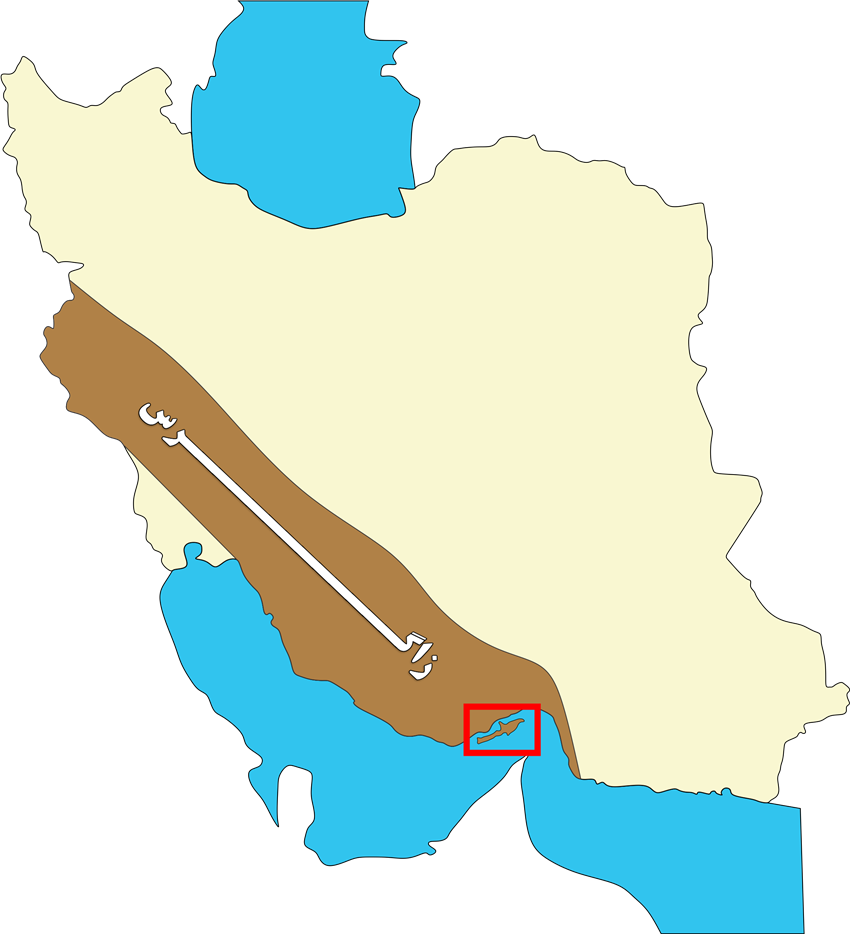 The north of  Persian Gulf  includes a part of the southeast of zagros structural zone which has been deformed and folded as the result of the last phase of Alpine orogeny in Plio-Pleistocene. The geological formation of this belt may belong to the late Precambrian to Cambrian and include diapirs attributed to the Precambrian called Hormoz Series, which has been active till now with a trend toward the upper formations at the earth level. According to the majority of geologists, this region from the tectonic point of view – has been active since the late Tertiary as the tectonic zone in the south part of the deformed forehead or the convergent belt along with the margins of the compression and collision plates of Iranian- Arabic continent. The region located in the southeast stretch of Persian Gulf along with Hormoz and Qeshm Island can be identified by the structural, sedimentological and geological features such as the mainland which is distant from from it- with 2.5km width in the narrowest parts.

Sea terraces of Tertiary sediments in Qeshm Island are partially accompanied by Quaternary deposits; therefore they have resulted from the compressive tectonic forces related to Alpine orogeny.

Quaternary Sea terraces very well often are horizontally stretched, while having a little slope toward the sea. The older terraces particularly those located on the anticline have a steeper slope and some mild foldings. The terraces are made of corals, zoomorphic shells and deposited marine settlements in the old coastal regions whose thickness varies from a few meters to 10m.

As for the composition, they contain coral deposits, lumachelle sandstone, limestone and sandstone which often discordantly cover the formation of the thicker yet weaker bedrock with a duricrust surface ( usually with layers of red sandstone and silty marl of Miocene, Pliocene, Mishan and Aghajari Formations cover it). The internal extension of the marine terraces at its most can observed in about 10km of the present coastline in Qeshm Island.

Erosion is the most effective factor in creating and forming the geological  phenomena in Qeshm. After erosion, we would refer to the effect of Namakdan Salt dome, which is also the main cause of emergence of the ores colorful outcrops and various layers. One can also see the sedimentary and stratigraphic phenomena in Qeshm, which in turn are to be discussed.

Erosion in Qeshm is primarily the result of the work of wind, sea waves, seasonal rainstorms, temperature change, humidity, mineral crystallization and secondarily factors such as tectonics and gravity. Erosion mainly happens in the Neogene' s sediments, which are softer, and the most erosion can be seen in the silt, marl and sandstone layers. In many regions due to the rapid erosion of the lower layers, which are weaker than upper ones, the space beneath the hard layers gets emptied and the layers due to effect of gravity collapse. Good examples of this feature can be seen in the coastal terraces near Souza and Doostkooh. In the regions far from the coast, wind erosion as well as seasonal rainstorms can also strongly affect the softer sediments and create a totally heterogeneous morphology of which the best example is Darreh-Setareha ( The Valley of Stars ) in the vicinity of Berkeh Khalaf village.

Almost all throughout the island, one can find a wide array of beautiful phenomena, which are the work of the erosion’s artistic hand. Abundance of weak and not resisting beds and their alternation with more resisting ones, results in the formation of erosional forms. In other words, intense erosion in some parts and the survival of more resisting parts is the main cause of such formations. Of course, these phenomena can be observed in the homogeneous layers as well and the cause behind this is the direction in which erosion factors ( such as wind, sunshine, slope and flow of water ) work; this finally results in the different levels of erosion to occur in different parts of the layer. Among the numerous form of erosion we can name the erosional columns such as Chimney Rocks, and mushroom-shaped, arched, global, kidney-shaped forms, small and big cones and pyramids, as well as the shapes similar to human profiles and different animals.

The plains and areas in the neighborhood of the sulfurous mineral spring in Kargah region include a collection of erosional forms. In this region, there are extensive hilly lands and fells, which are suggestive of the Bad Land type.